Bandaged rock violinist Nash the Slash, a.k.a. Jeff Plewman, dead at 66
Mysterious member of the band FM wrote his own farewell upon 2012 retirement.

Jeff Plewman, the Toronto electric violinist and experimental musician who performed as Nash the Slash with his face enveloped in surgical bandages, has died. He was 66.

His death was announced on Facebook by friend and collaborator Robert Vanderhorst, who wrote that Plewman passed away over the weekend. Vanderhorst also confirmed the death in an interview with the Toronto Star.

Plewman co-founded the progressive-rock band FM, who issued their debut “Black Noise” in 1977, and quickly established a long career as an eccentric solo artist whose compositions were nominally new wave but really, impossible to classify in a tidy fashion.

He was secretive about his identity, performing with a tuxedo, top hat and sunglasses as well as the rags on his face, and he was evasive when asked in interviews for his real name.

“It sounded like this huge band and it was this guy sitting there in a tuxedo and a top hat, you know?”

Film and TV producer and director Colin Brunton knew Plewman for more than 40 years, and remembered his friend as a music pioneer only fitfully recognized for his innovations.

“He was so far ahead of his time,” Brunton said Monday in a telephone interview.

“When he performed … you couldn’t even grasp how he was doing it. He would play a couple riffs on his electric mandolin and he would create a loop for it — and people back then didn’t even know what a loop was.

“It sounded like this huge band and it was this guy sitting there in a tuxedo and a top hat, you know?”

He would soon become only an intermittent presence in the band as he focused on his atmospheric solo work. In 1979, he put out the moody “Dreams and Nightmares,” which was intended as a soundtrack for the 1928 surrealist film “Un Chien Andalou — a piece he had been performing live in Toronto for years.

A more accessible work arrived with 1982’s “And You Thought You Were Normal,” which featured production from Daniel Lanois and actual vocal work from Plewman. He fetched a Juno nomination in 1984 for most promising male vocalist of the year, though much of his work was instrumental.

He rejoined with FM for a long stretch in the mid-1980s (and again in the ’90s), contributing to 1985’s “Con-Test” — which featured the popular single “Just Like You” — and 1987’s “Tonight,” though he harshly criticized the production of the former record in its liner notes.

All the while, he found work as a film composer, writing the music for movies including Bruce McDonald’s “Roadkill” and “Highway 61,” “The Kidnapping of the President” starring William Shatner and Hal Holbrook and 1985’s “Blood and Donuts.” He also collaborated with Vanderhorst on a series of works that combined surreal visuals with his unorthodox music.

Plewman announced his retirement from music in 2012, writing on his website that it was “time to roll up the bandages.” In a long posting, he wrote that he “refused to be slick and artificial,” and noted his pride in a “remarkable 40-year career in the music biz with no hit (commercial) records.” He also pointed out that he successfully sued Pepsi for “misappropriation of personality,” but received only bragging rights in exchange.

“He was very fed up with how easy it was for people to access his music and not get paid for it.”

By way of explaining his retirement, he wrote about the way file-sharing had “devastated” an important source of income, a matter that Brunton confirmed bothered his friend.

“I think he just lost the buzz of performing,” said Brunton, whose documentaries “The Last Pogo” and “The Last Pogo Jumps Again” explored the bustling late ’70s Toronto punk scene in which Nash the Slash thrived.

“He was very fed up with how easy it was for people to access his music and not get paid for it.”

Plewman publicly confirmed he was gay in 1998, but was generally reluctant to reveal any details about his real persona, proving coy when asked about his real name.

He first took to the stage in his mask in 1979 after the Three Mile Island disaster, warning of the dangers of the nuclear age.

“I think he loved the mystery,” Brunton mused. “He loved the showbiz thing where he had this really cool persona. … He was quite a character.”

He opened for artists including Gary Numan and Iggy Pop — though, as Plewman pointed out in his own retirement note, famed Rolling Stone scribe Lester Bangs once wrote that “Nash the Slash is the kind of opening act that makes the headliner work twice as hard” — and proclaimed himself the first Canadian artist to use a drum machine on an album. His other innovative works include the album “Decomposing,” which was designed to be listenable when played back at any speed.

Numan was among the many who paid tribute

Brunton, for one, argues that Nash the Slash’s contributions have been unfairly marginalized.

“He was pretty influential,” Brunton said, listing Academy Award nominee Owen Pallett as one of the musicians indebted to Nash the Slash’s influence.

“Nash really had a talent and he knew what he was doing. He was ahead of his time. And he was a very nice guy, very opinionated.”

The full retirement message posted by Nash the Slash in 2012:

It’s time to roll up the bandages. The thrill is gone, it seems for me more than B.B. King.

I’m proud of my remarkable 40-year career in the music biz with no hit (commercial) records. As an independent artist without management, major label support or any grants whatsoever (thank you Canada Council and Factor), I toured internationally and accomplished so much. I was unique on stage and on my recordings. I refused to be slick and artificial. I opened for and toured with some of the best musicians in the world, and was regarded highly by my peers. Rolling Stone journalist Lester Bangs once reported, “Nash the Slash is the kind of opening act that makes the headliner work twice as hard”.

I created one of the first Canadian independent record labels (Cut-Throat Records) in order to release my music and merchandise to the public. I was the first Canadian musician to use a drum machine on an album (1978), at a time when drum machines were outlawed according to the bylaws of the Toronto Musicians’ Association. I was the first to record an album, ‘Decomposing’, which was listen-able at any speed, and miraculously reviewed in Playboy magazine. I composed and produced music for film and television, and for multi-media exhibitions of the surrealist paintings by my friend Robert Vanderhorst.

I hold the distinction of suing the corporate giant Pepsi Cola of Canada for one million dollars (in the Ontario Supreme Court, 1982) for ‘misappropriation of personality’; I won but received no money, just bragging rights.

I travelled across Canada, the US and Europe, and especially adored Newfoundland. I supported Gary Numan and Iggy Pop tours, and was invited to perform in Russia. I received airplay on Polish National Radio in 1979, when Poland was still behind the Iron Curtain. (Years later, a Polish fan explained to me that, because the first LPs were instrumental, there were no lyrics of ‘western decadence’ or ‘punk anarchy’ to grade the musical content as unsafe for communist consumption. Too bad no one in Poland could afford to send away for my records.)

Just heard that Nash The Slash has died. Nash was quite possibly the most unique performer on the planet. Very sad news. GN on twitter 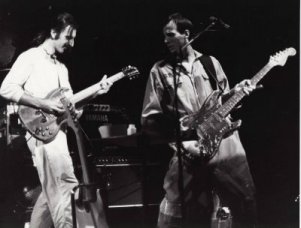